Woke up with a rather unusual sensation for a boxing day, excitement. We left the cool highlands and snaked our way through the hill passes heading south to the coast. The views were beautiful and the drops from the side of the road were steep. The Italian Job sprang to mind.

We were breaking today’s journey at a national park called Uda Walawe which is supposed to be full of elephants. Since we had seen a wild elephant washing itself in a lake a few days ago we decided it would be nice to see them in their natural environment and it is, after all, the national animal and symbol. We had also heard of wild elephants attacking tourists recently and a German cyclist being thrown across a road resulting in a broken arm and leg. The parks have electric fences now to try and keep them in, but various people had told us of houses being knocked over when they had managed to get out.

We got to the park and clambered into a 4WD and set off through the fence with our guard reassuring us by saying that he wouldn’t get out of the car as one of the vehicles had been attacked this morning. We laughed nervously. Straight away though we spot a solitary male by the side of the track picking and munching away at the grass. We drive alongside, roughly 10 foot away and he is too busy stuffing his face to care. After a minute or so we leave him in peace and feeling dead chuffed we drive down the kind of path 4WD are designed for. Enjoying the warmth of the sun and the scenery we suddenly turn a corner and crossing the path 20 foot ahead of us are a herd of about 10 adults and 2 children. The driver stops and kills the engine. One of the females turns and stares at us. Hoping she’ll turn away and carry on, she does what neither of us want and heads straight towards us. She comes up alongside what was formerly Al’s side of the car and scrapes alongside, giving the car a gentle rock with a push of her hips. At the end of the car she turns and walks slowly back and stops to inspect us, wondering why Al is crouching on the floor. I do a bit of elephant whispering and off she potters in the knowledge we are not a threat to the kids. More nervous laughter and we drive on thrilled and scared by our encounter. The park is beautiful and we also see a crocodile, jackals, water buffalos, loads of birds and loads more elephants but none as close. As we are leaving we pull alongside a Toyota hiace which has also had a close encounter with an elephant this morning. However it has a smashed rear windscreen and a huge dent on the drivers side. Our guide kept shouting “I am lucky, you are lucky” and perhaps this time it wasn’t just tourist banter. (After we paid the guide, he went straight to the local lottery stand and bought a ticket!) 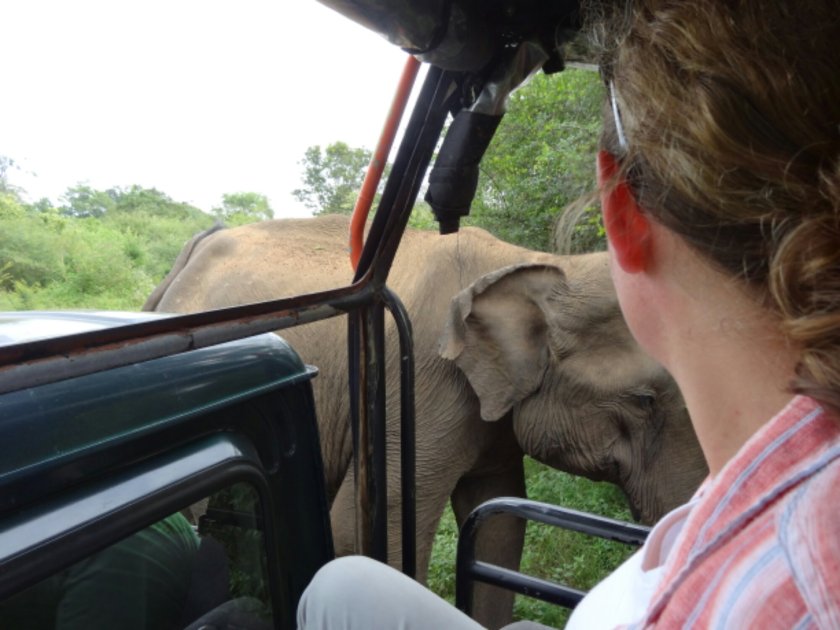 We got to Tangalle on the south coast and noticed a lot of armed soldiers everywhere. The driver explained that this is the presidents hometown and he was visiting today on the 7th anniversary of the tsunami which decimated so much of this part of the world. There are still abandoned houses metres from the shoreline.