Ok, I have to admit that wasn’t the best nights sleep mainly due to bring completely terrified of being in such a small room in a massive building and being old enough to worry about such things, Guy slept through fine!
We headed towards the HK history museum, and stopped off for a HK breakfast of congee (watery, boiled rice, ugh!) and 1000 year egg noodles (much nicer, didn’t see any old eggs in it thankfully).

We spent about 3 hours in the museum learning about HK and how we reset the trade balance in the 19 century by getting all the Chinese hooked on opium and eventually won HK from them for 156 years and made it the thriving metropolis is today – ok, the last bit was added by me, not the Chinese!
And there were dinosaurs on our way to and from the museum!

We were then peckish, again, and went in search of a hawker food stall that was recommended by the Guardian, so were were looking out for a stream of middle class, Leftie liberal types, however we didn’t see them so we followed our noses, through the empty market stalls, with a slight whiff of stale meat and fish, in dingy corridors wondering if we were going to have an appetite left when we got there! Anyway, we eventually found the stall by its orange bowls and yellow spoons! We were the only tourists in there. We ordered the beef balls with noodles, with a touch of ginger and tangerine peel, it was delicious and an example of fast food at its best, we couldn’t have waited more then a minute for it to arrive! The cost was £2 per head, bargain!

The then got the star ferry over to Hong Kong, a fabulous journey of about 8 mins seeing all the neon signs lighting up. As it was a little late on a Sunday for seeing the tourist sights we, reluctantly, decided to follow a pub crawl in the lonely planet, the first bar was closed, the second we couldn’t find, by this stage we had found a wine bar that had taster glasses for £2 a shot…..it was a very small shot, so we only had one each.
We then gave up on the planned pub crawl and decided to just go anywhere that sold wine or had happy hour, and we found a fabulous wine bar that sold large glasses of delicious wine, it was only when we realised it was £8 a glass we realised that we were back paying UK prices for booze!

Happy hours are also different, in that buy one get on free is per head, not per round! So we ended up in an English boozer where everyone was watching the tennis (!) we had a bottled ale each and carried on the pub crawl until we were hungry.

Tea was in a chain restaurant Tsui Wah, and it was delicious,Guy had spag bol sauce, rice and a raw egg on top, crispy prawn wontons, steamed chicken with soy and honey, and another rice dish which was fabulous. 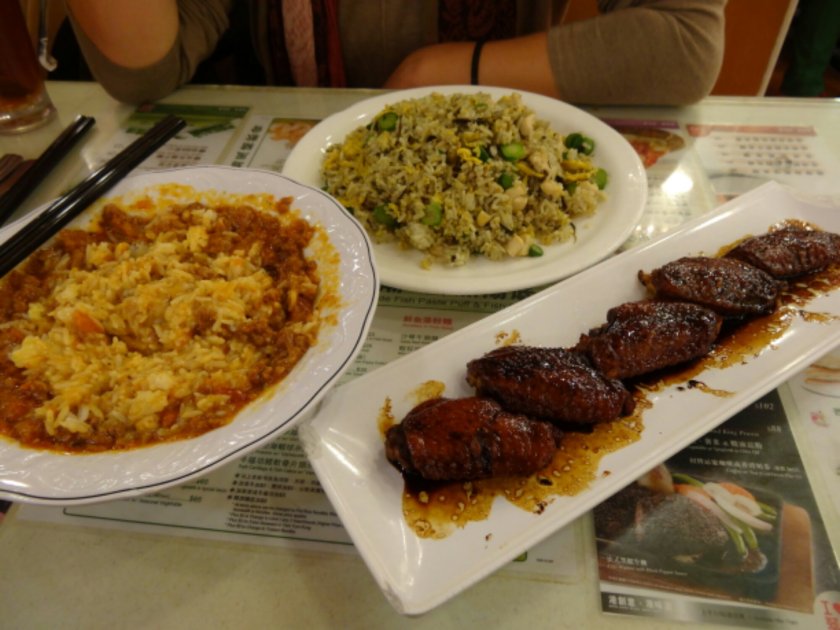 We got the ferry home, had a quick nightcap in one of the numerous Irish bars near our room and had a great nights sleep!