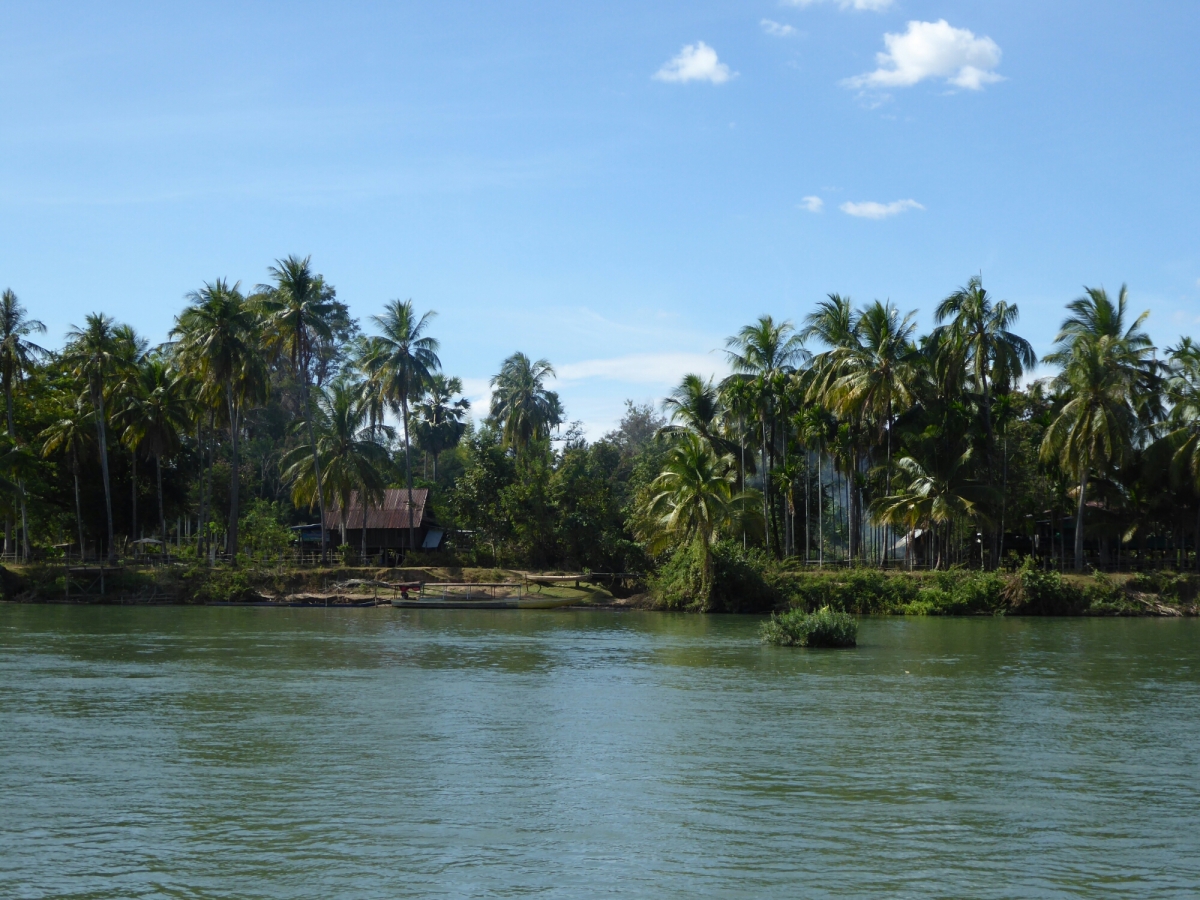 As we were up early we chose a table for breakfast overlooking the Mekong in full morning sunshine. We soon realised this was a mistake, as even at 8am the sun is fierce and we were glad we had already used factor 30 suncream. Al ordered Beans on Toast, a menu item we could not believe we were seeing and as we excitedly waited, we stared at the river.

Today we were going on a day trip to Don Khon, another popular tourist island. Personally I wasn’t that bothered about the destination but I was really looking forward to slowly puttering up and down the river and it was an opportunity to see if we liked Don Khon and if we should move there.

We wait with our fellow day trippers while Mr Phoumy, the organiser sold last minute tickets to a French and Spanish girl. He shouts ‘let’s go’ and we descend down the steep river bank and board our vessel. The French/Spanish girl’s scooter is carefully lifted into the boat but when they come to pay, there is some confusion whether they have bought a one way or return ticket so the scooter is lifted out again.

We set off and turn downstream. The sun is bright and there is no wind, so the river is smooth. We are transfixed by the palms lining the banks, such an exotic view. There are kids playing on the shore, women washing clothes, water buffalo resting in the shallows. We pass a Wat where the bright orange monk’s robes are drying outside, adding colour to the green bank side.

I have to pinch myself. I’m in Laos, travelling on a boat down the Mekong. I could not of dreamed of this scenario when I was young. 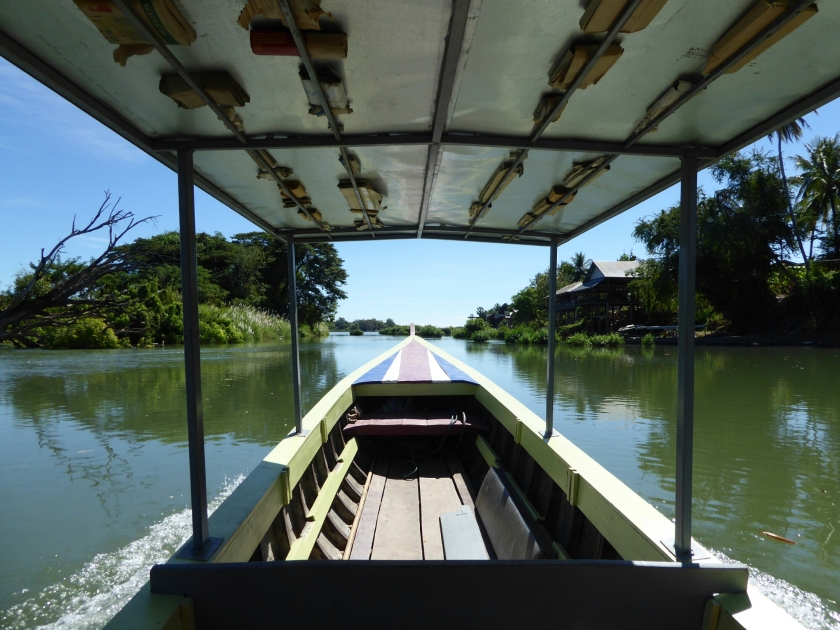 We arrive at Don Det where everyone except us and an Australian family get out. Twenty minutes later we pull up to Don Khon. We chat to the Aussies as we view the old French railway. They head off to hire bikes but we decide to walk and under a fierce sun we make our way down a dust road to Somphiant waterfalls.

The falls aren’t the highest you will ever see but they are impressive and we watch kayakers descend down scary looking rapids. One guy goes under and we don’t see him for a while but thankfully he pops up and his friends pull him ashore.

We follow unexpected signs to ‘The Beach’ and pass through a small beautiful resort of open bungalows with hammocks and a small bar. The sand burns the feet but the beach is a relaxing place. We have worked up a thirst in the heat, so stop at the resort for a beer lao shandy and sit and watch the river. It’s a great spot.

After some time we walk back to the main restaurant area and stop for rice and veg. We reach the boat and once the Aussies have arrived, head back to Don Det to pickup the Spanish/French girls. They aren’t there so we wait and wait but eventually we need to leave to get back before dark. The two hour trip back is spent chatting to Aussie dad, Paul, discussing capitalism, Trump, immigration, left wing politics and generally putting the world to rights.

The conversation continues over our evening meal, late into the night as we eat and drink with them at the restaurant next door.