Up in darkness and some last minute farewells to our flexible, friendly schoolmates. The mixed feeling of sadness to leave but excitment at being on the road hits. The taxi driver emerges from his house next to the school and his cab is filled with the stale, dank fug of last nights cigarette smoke. Two buses later and we pickup our online purchased train tickets from a queueless ticket counter. A first for us. To celebrate we indulge in an americano and a creme brulee latte and we idle away some of the three hours before the train is due. Next to the Taiwanese cafe is a Korean Fried Chicken restaurant which provides breakfast and train snacks are bought from the shop opposite. We have a 20 hour overnighter to Kunming in Yunnan province, our first overnight train since we arrived into Beijing in October.

The train is a T class, one of the older type with a top speed of 140kph and we have the middle and top bunks in a six birth open compartment on a carriage that sleeps 60 people. As we walk down the platform, we can read that the train originated in Shanghai and we can see that the bunks are already well populated. As we enter our carriage the air already feels tired with a stuffy, stale, claustrophobic atmosphere. Our bunks seem used but clean and unaware of bunk etiquette we climb up for a while. I eventually work out that the seats opposite our compartment are supposed to be for our use, so when they’re free, I climb down and stare out of the window.

We trundle through paddy fields where water buffalo roam and through huge cities where clusters of new high rises sprout up like mushrooms. Children run up and down the shared carriage walkway chased by shouting mothers. The middle aged man in the top bunk opposite Al climbs down and opens his case which is full of boxes of medical tablets. He rifles through a couple, reading the backs and opening packets and inspecting sachets of powders. I assume he is a travelling salesman but when he takes some tablets I realise he is ill. He spends the whole journey coughing and sneezing without covering his mouth or nose demonstrating cultural differences between us.

The afternoon dissolves into evening so its pot noodle time. A highpoint! Chicken for me and pepper beef for Al. Dessert are sweet coated peanuts. 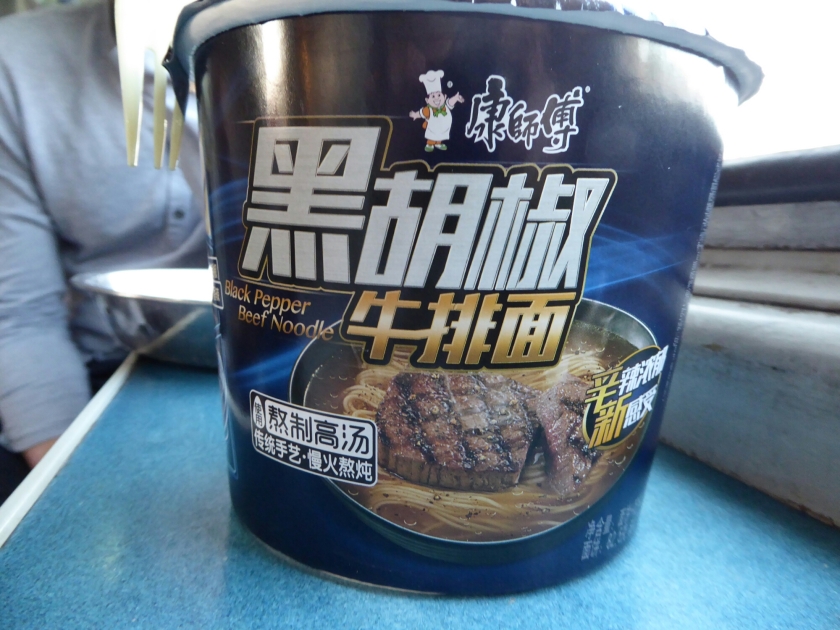 We climb back up and read kindles as the light outside fades and the train fluorescent tubes warm up. The curtains are all drawn and then the lights are turned out and the smell of cigarette smoke wafts down the carriage.