We were up and waiting, along with other farang, at the roadside at 7am. Our pickup arrived at 7.15am, and we piled into it, our rucksacks were strapped to the top and off we bounced down the road, to the ferry port.
We had arrived a full hour early for the ferry, so thought we would avoid all the delicious looking bakeries and get a good seat on the boat, meaning one at the back for a less bumpy ride.
Meanwhile everyone else was wandering onto the ferry with fluffy pancakes, fabulous muffins and iced coffees. But we were fine with that, honest!
The journey was predictably beautiful, many tiny islands jutting out of the the sea covered in foliage, the odd beach dotted around, and mostly uninhabited.
We knew we had to drop people off at an island on the way, and assumed that would happen by docking at a ferry port, oh, how wrong we were! Instead when we were near the island the ferry slowed down and about 6 longtail boats came close enough for the passengers to be taken on board and dropped off in the middle of the sea!

The rest of the journey was uneventful, and we landed in Krabi on time!!!!!!! And then got an English priced taxi to our hotel, I think the taxi Mafia in Krabi lobbied for a ferry port 3km away from the town and then also lobbied for it being compulsory for all companies to charge ridiculous fixed prices for a ride into town, £6!

We were learning from our Joseph and Mary routine so had thought ahead and actually booked a room. However on arrival the kid behind reception flicked through about 20 room bookings of which ours was not one of them! He called his mum, who arrived about 20 mins later, and immediately said our booking was fine and showed us to a massive room, with the now usual TV and fridge, and with the less unusual smell of drains, which we now associate with Krabi. I don’t know if the local council have done away with the drain cleaning department or what, but everywhere you go your senses are overloaded with the drain smell, and quite a few of the massive covers have been covered over to try and stop the smell in a futile way.

Unfortunately the hotel owner had to dash off, therefore we were left with no map or much idea of which way to go into town other than relying on Google maps. So we took the wrong turn out of the hotel, and walked into town the dull and laborious route, passing about 5 7/11’s on the way and were wondering what the hell all the guidebooks and blogs were talking about when describing this place!
We did eventually arrive at Krabi centre and it was lovely with a relaxed atmosphere, lots of backpacker facilities, which now mean coffee shops, Wifi, traveller clothing shops – you know tie dye stuff, fisherman’s trousers (confession: we both are now proud owners of a pair of these) Chang singlets, wooden tat etc. It is roasting hot though and we need to keep visiting 7/11’s which have the coldest air con known to man.

And the town tourism planner has also come up with some great photo opportunities for tourists in the shape of crabs (for Krabi….geddit?)

The shops have amusing names……. 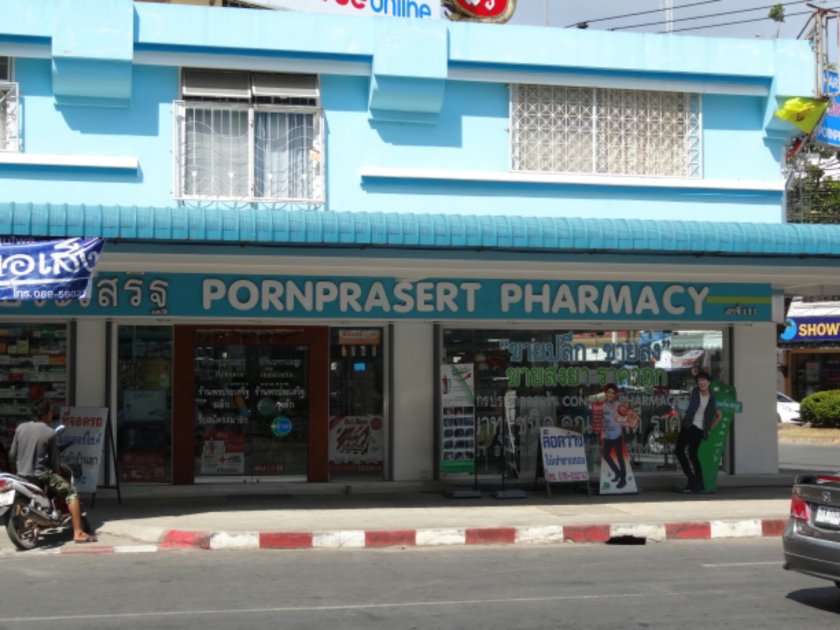 And dummies are alarming

Our plan was to go to a couple of little known islands, Ko Phayam and Ko Chang (little) for the next week or so and go ‘off grid’ as ‘they’ say. Which is a great plan until you realise that there will be no comfortable tourist bus to go on, no hotel pick up and no information at any of the tourist places we asked at, other than go to the local bus station and hope a local bus is going at maybe 8am? After about the 5th place of asking we saw a farang in the street wearing a Ko Phayam T-shirt and so checked with him how he had done the trip, which gave us more confidence that we were on the right tracks.
So, a 6 hour local bus journey awaited us tomorrow, with the possibility of missing the afternoon ferry out to Phayam and so staying in a Thai town which was a bit of a dump.
We thought we would prepare for this by going to the night market and eating loads of strange food and having a beer, not much different to any other night really. 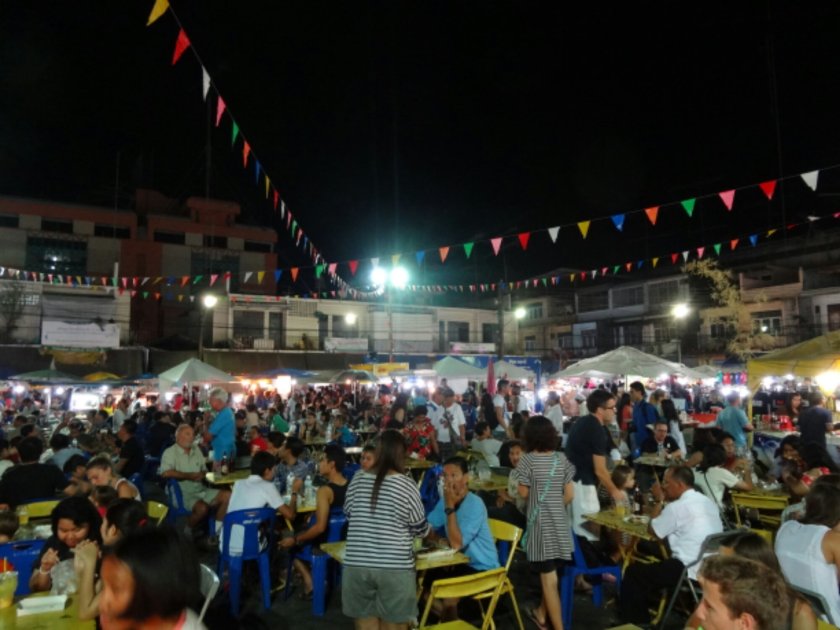 The food was delicious, exciting and fiery! Guy had various meat things on sticks.

I had chilli with a small amount of chicken, rice and a load more chilli!

We found a bar and looked up at the TV and saw LIVE football, the first time we had seen live football since leaving the motherland. And it was Liverpool Arsenal. And there were 4 goals in the first 20 minutes! We were happy, so happy in fact that we decided to supplement the Chang with a small bottle of a new whisky, Hong Thong. This inevitably delayed our plans for sitting on a local bus for 6 hours the next day…… 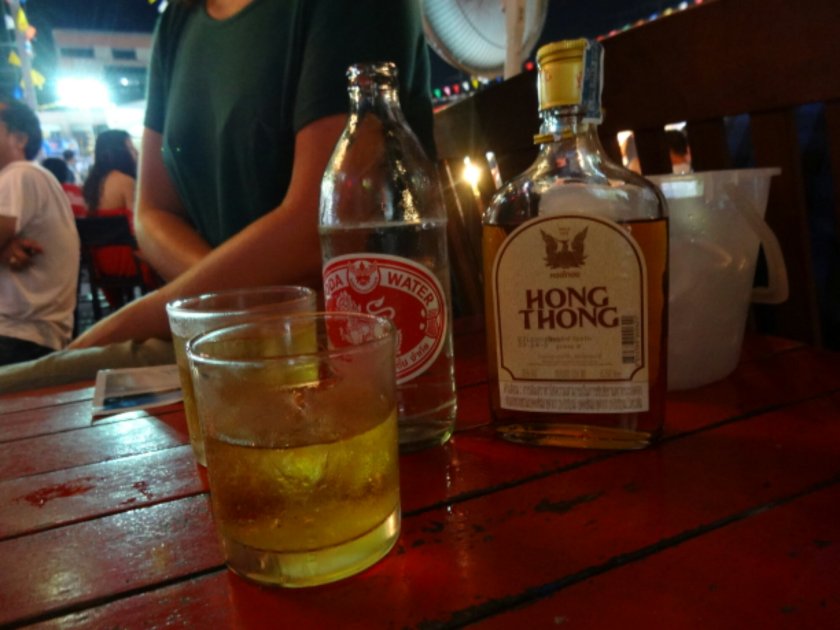 Nothing much happened today. We started off with a lovely walk up and down the beach.

Then a sunbathe and swim and at midday we headed for the shade. Today we both had an appetite and had seen a chicken BBQ and Thai food cart near the hotel so we headed there. Papaya salad, chicken larb and a piece of BBQ chicken for lunch. At last, some decent food here, as we seem to be paying over the odds for sub standard fare. 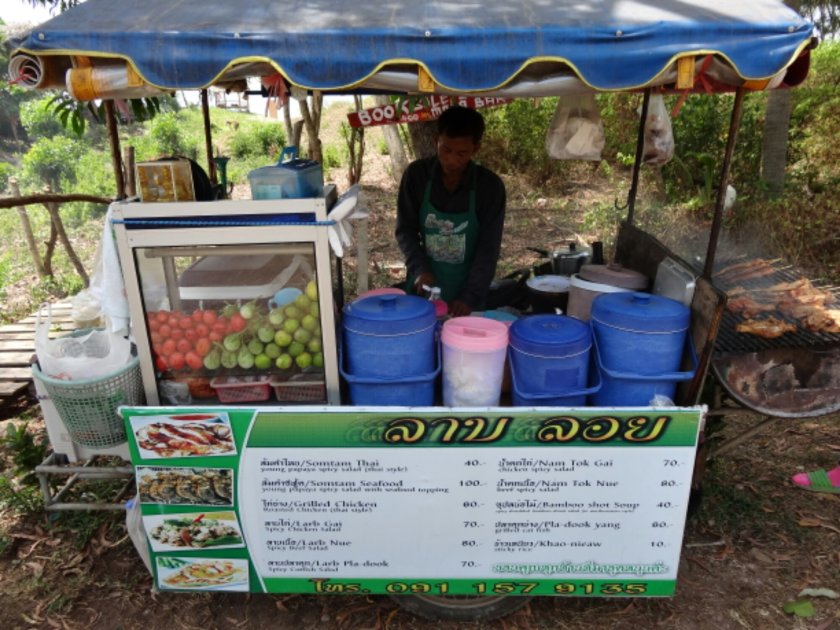 We headed to a posh place for fruit juice then to the beach for sundown.

At our third restaurant choice we finally ordered a veg jungle curry and a sea food red curry. The red curry was one of the best things I’ve eaten on this trip. Spectacular. Coconut and fire. My normal bald leaky patch became a full body sweat. 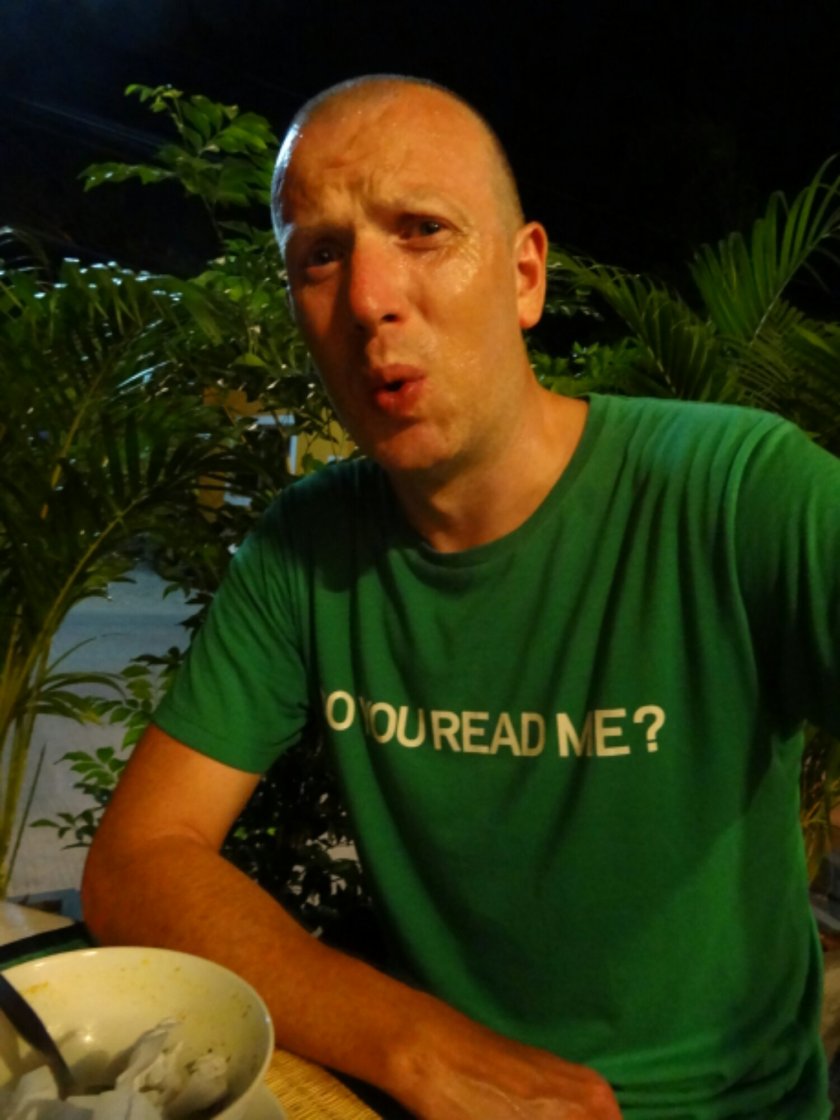 Home to pack as tomorrow we leave for Krabi.

Nothing much happened today. We went to the beach and by 11.30 it was so hot we had to head to the shade. We did a bit of shopping but had no appetite for lunch despite seeing this inviting restaurant.

By 2.30 ish we headed back to the beach. After bronzing for a while we went for a swim and I got a jellyfish sting.

I decided to treat it with Chang beer which had already eased my malaria/avian flu/viles disease symptoms so with the call to prayer blaring from a nearby loudspeaker, we headed for a sunset bar and after watching the glorious show had a chicken massuman curry and a yellow seafood curry that tasted the same.

We needed a room for the next few days, so again we were playing Mary and Joseph, it was becoming increasingly dull and frustrating. We got a tuk tuk driver, with a black eye and various scars, who was very willing to take us from door to door at each place asking for a room. However either the price was extortionate or the one bungalow that was in budget was a dump, still we kept on trying and in the end we did find somewhere, not beach side, but clean, compact and run by a lovely lass. She also explained why our guy was so keen to make sure we had somewhere to stay as they get 200 Baht (£4.20) as commission, per night of our stay. So we said we were only staying one night. That is on top of the price we negotiated for the ride, so he had made a nice 500Baht out of us.
Now we had a room for the next few nights we had to see what the beach was like……this is what it was like….. 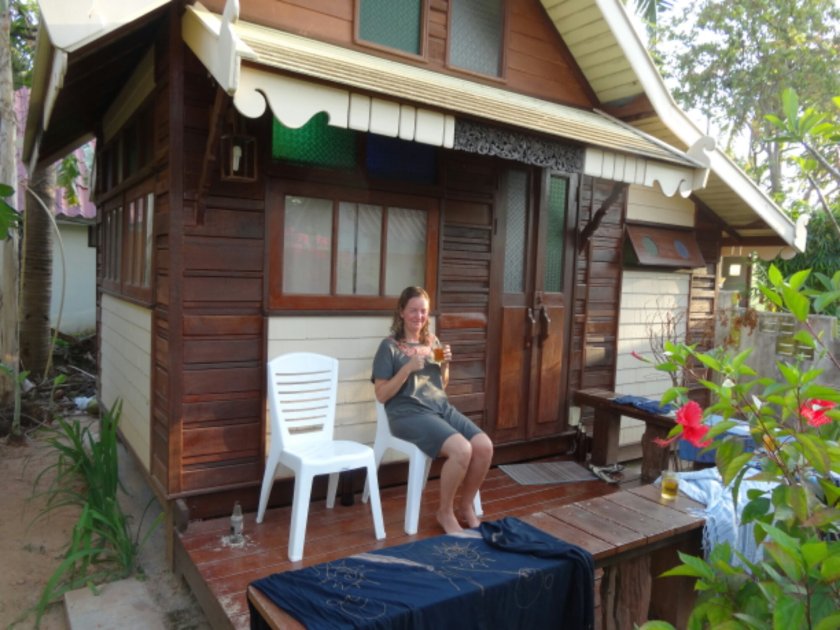 We also had a mini fridge, that desperately needed filling so we went off to 7/11 to get supplies, ok, mainly beer! And on the way we passed a woman with a BBQ chicken and papaya salad stall, handily she also sold beer! It was delicious, the papaya salad was sour from the lime, sweet from the sugar and fishy from the dried shrimp and fish sauce and just one birds eye chilli made you sweat a little….. 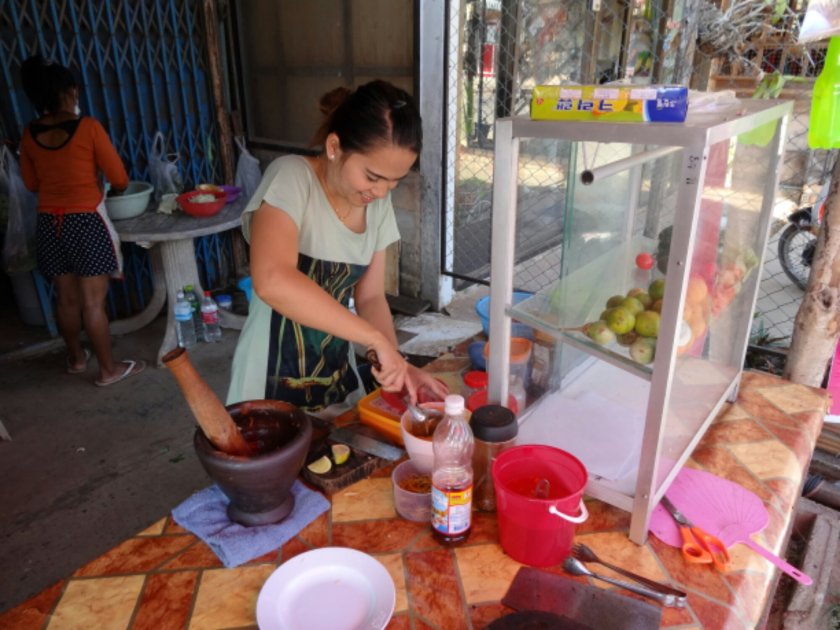 We saw a few happy hour signs up for sunset, so thought it would be rude not to indulge ourselves……just a few times, it was blissful watching the sun go down, with a slight breeze and a very chilled Chang beer.

Loads of restaurants had BBQs set up on the beach,and maybe we had had one too many happy hour beers, but we stupidly decided to go for this, as it is all done by weight, he actually weighed out 2 prawns,they were 200 Baht, yes, £4.20 for two slightly large prawns, undeterred by this ridiculous pricing we also ordered chicken, squid and 2 corn on the cob, along with a beer or 2 this meal cost us £20, a whole days budget! We sobered up pretty quick and had a lovely walk back along the beach, seeing all the restaurants lit up and people lighting Chinese lanterns and seeing them float away into the night sky. 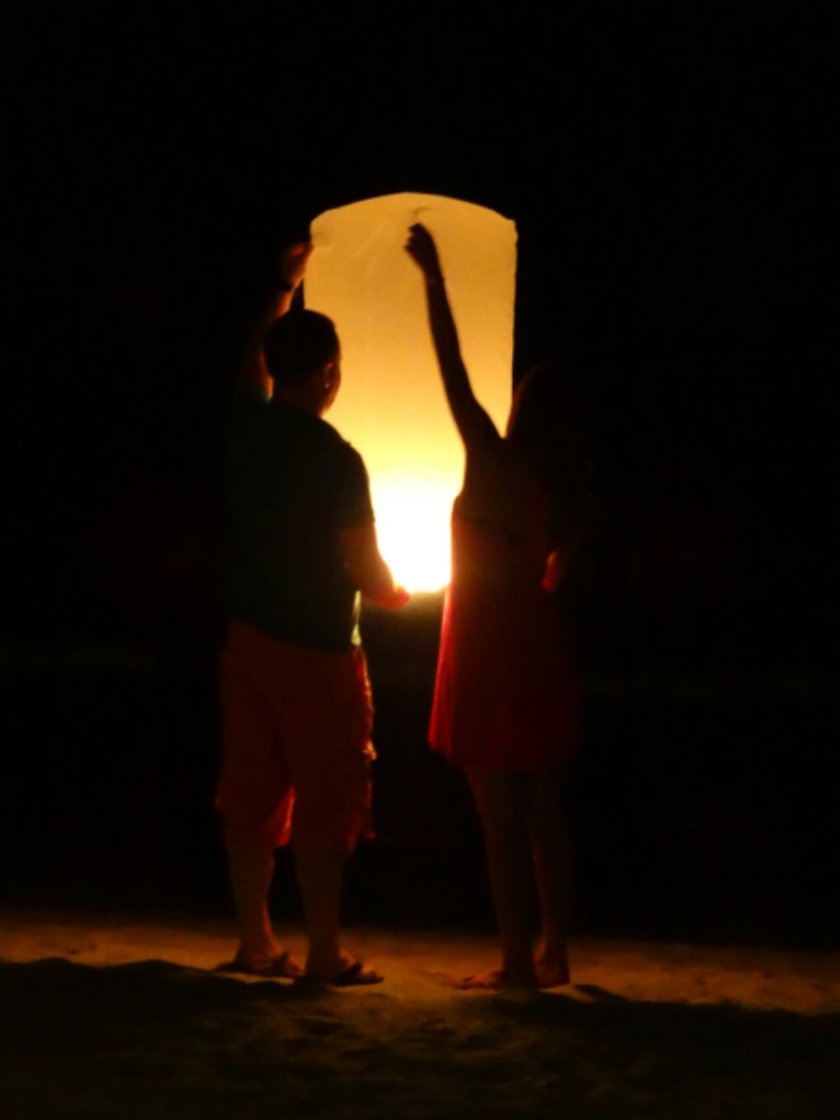 Up at 7am for our 8.30 bus to Ko Lanta. The company had told us to be in reception at 8am so we grabbed curry and roti for breakfast and checked out. At 8.30 we asked the receptionist to call the number on the bus ticket which she kindly did after charging us. The person on the line said not to worry it was on its way. We had been in this situation before and knew that the buses tour around the hotels picking up passengers and concluded that we were probably the last pickup. We waited and watched Mrs Overall slowly fulfill her duties. At 9.45 the bus arrived. It was empty. We were the first pickup. Thankfully we only had to pick up two Paraguayans and we left. The driver spent no time trying to make up for his lie in and we hurtled towards the Thai border. We changed buses in Hat Yai and again in a car park somewhere for the final leg to our island paradise. We also had two short ferries and we chatted excitedly to our fellow passengers. An Italian couple and an elderly German bloke with a beautiful Thai girl.

The beautiful slim Thai girl in the figure hugging grey dress is and or was a man. I guess its where you drawn the line or where the surgeon draws the knife.

We were dropped off at the backpacker zone and just like our friends from Nazareth were turned away from many many inns. The sun had dropped and after a slight foot stompy tantrum (me), we got the last room at Dreamy Casa run by a very helpful Italian guy who recommended a restaurant for tea. We headed straight there and shared a seafood green curry and a Tom Ga which was one of the best things we’ve eaten. Sweet and sour coconut fragrant soup. Bloody delicious! We had a beer in a bar far cooler than either of us run by a rasta whose dreads reached his calves and turned in. 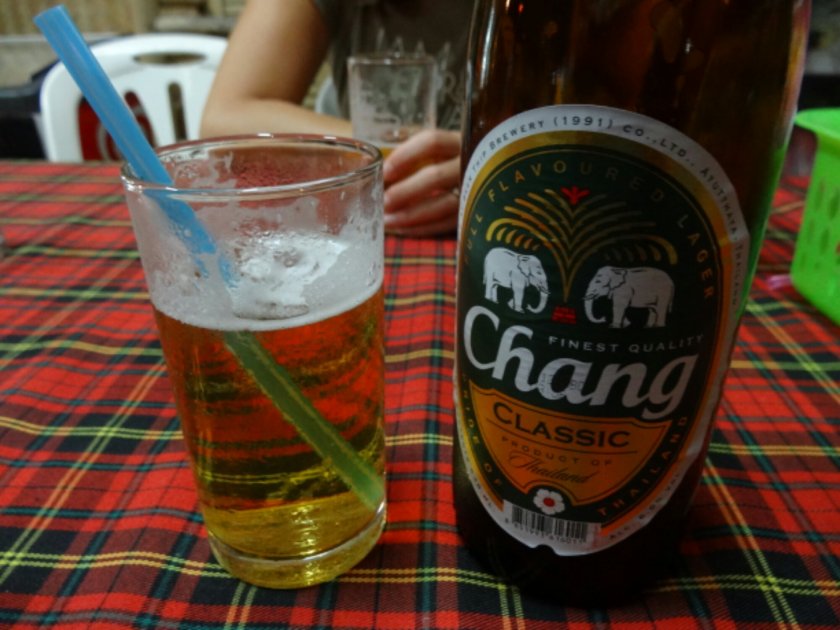