For those of you who are fed up of our long travels and stories that go with it, in 3 weeks time I will be back at my desk, fielding phone calls and trying to cope with emails again. To cope with the inevitably of work we are escaping to the Thai island of Ko Phayam.
So, we were up at 6.15am on Monday morning, much as I hope to be in 3 weeks time, and were waiting at the side of the road for a local pick up truck to take us to the bus station. Pick up arrived in 20 mins, equipped with on board karaoke, which no one took up at this ungodly hour of the morning, thankfully.  Whilst waiting we watched local Thai’s going for a jog or cycling around on their shiny Trek bikes for exercise.
The bus station was strangely quiet, nothing really happening, but as usual in Thailand someone greeted us with hello! And, where you want to go? Ticket booked, bus rocked up early, this was looking easy! 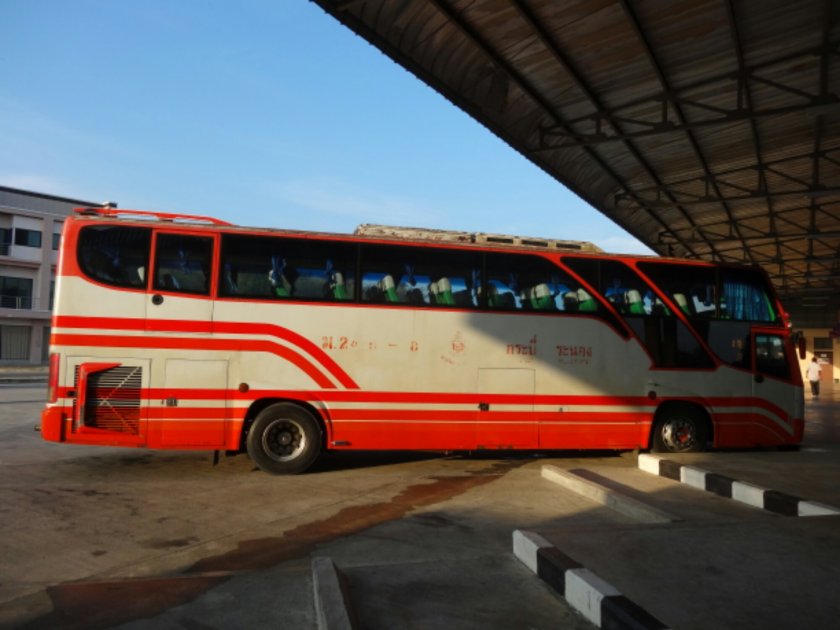 Bags on bus, a few people boarded, we all turned off the air con which was set to blast setting and we set off on a supposedly 5 hour journey and to our delight it was surprisingly karaoke free, marvellous!

We had a few stops to make for people on the roadside wanting a lift, one of which had an amazingly weak stomach and sat behind me. She had a never ending supply of plastic bags and proceeded to spend much of the next 4 hours yakking up into the aforementioned bags. Thankfully it was NOT on a Butler vomiting scale of decibels, or on the red wine scale of a certain Ms Eggleton back in the day! So I shoved a load of tiger balm up me nose and tried not to think about it.

Bus arrived on time, well, 30 mins late, but hey, what is 30 mins between friends? We knew that we had about 20mins to make the next ferry so instead of taking the easy safe ride, in a small van, to the ferry port, we took the ride, with WW2 style helmets, via motorbike. Bearing in mind the last time we both got a motorbike it was 15 years ago and it was a knackered old thing and we ended up driving through someone’s garden as the brakes didn’t work, you could say we undertook this 9km ride with a certain amount of in trepidation and fear.  Obviously with an 12kg rucsak to weight you down, that should cushion the fall…..all the worries were for nothing as we managed to get to the ferry port in one piece, but about 5 mins too late for a seat on the 2.30 ferry, so we waited for the 4.30 ferry, and were entertained by a more mature lass, drinking beer and telling us stories of how she had stayed on a Cambodian islands and not showered for 5 days (the water was brown) and had bought some pills for ‘men that smell’. Time passed quickly and we were soon on the high speed boat to Ko Phayam with no bungalow booking and the woman at the ferry port who did bookings told us there were no rooms at the blooming inn, again!
Arrival at the port was somewhat undignified, scrambling up a port wall on a rickety steel ladder, but at least we didn’t have children to unload, just a backpack that could be slung off the boat.
This island is so small there are no cars, just motorbikes, so our second motorbike journey of the day was undertaken, this time without the WW2 helmets, in fact without helmets at all…….weaving our way through very small roads and dodging other farang who were out for a days bike ride too.  Our luck had changed and we got to a random resort that had a beach bungalow, for 1000Baht with outside shower and electricity from 6pm onwards!  We will look for something cheaper tomorrow!
We were there in time for Guy to take more pictures of beach sunsets and then bar hopped down the beach in the pretence of checking out menus! 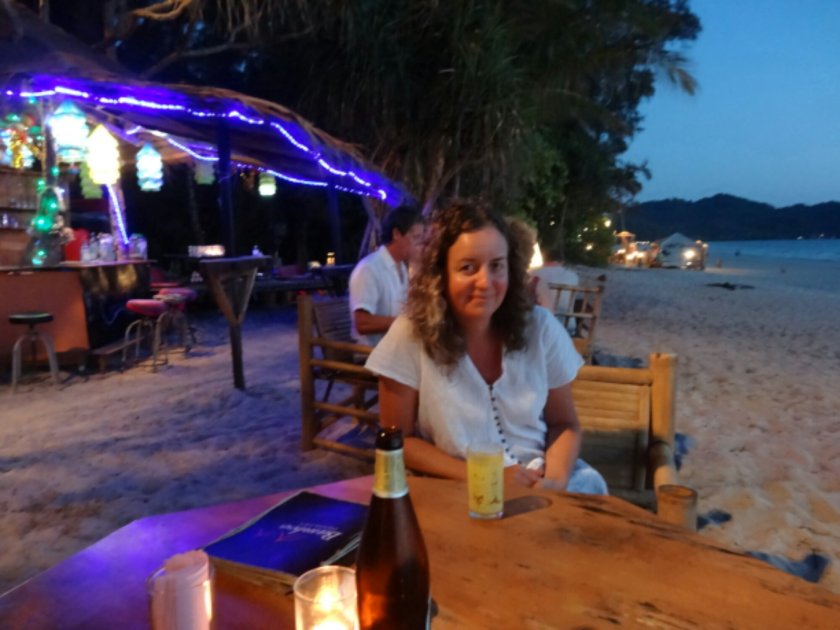 We ended up eating at our place, laab (minced chicken with chilli, lime, Thai basil and mint) for me and Tom Yum kuung (prawn soup with lemongrass, kaffir lime leaves) for Guy, both were delicious! 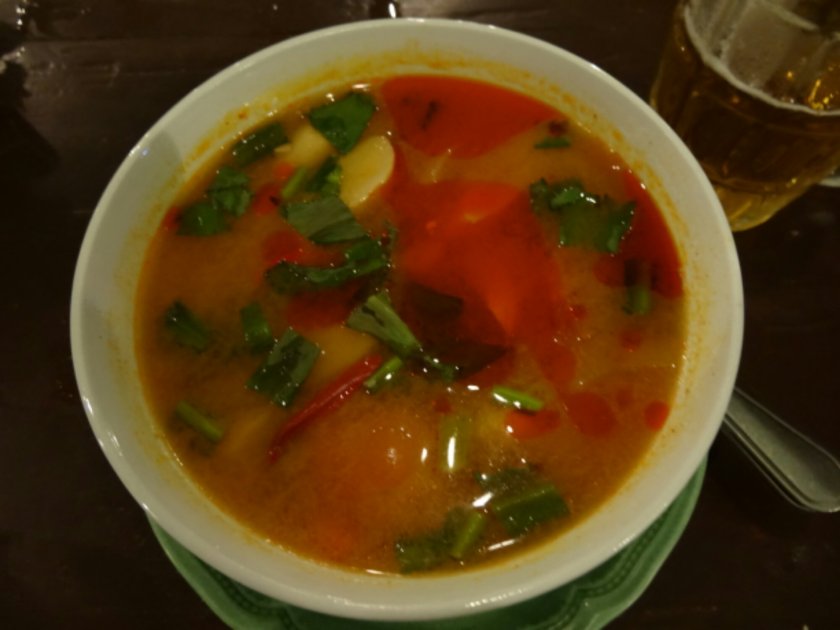